Ashgabat hosts an international transport forum, recommendations on how to protect yourself from sunlight on hot days and online payment of pension contributions 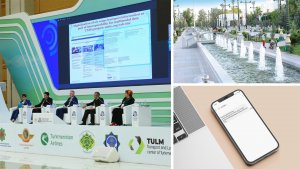 1. The conference “International transport and transit corridors: interconnectedness and development” started its work in the capital of Turkmenistan. More than 400 delegates participate in the forum, of which more than 170 are representatives of foreign companies and 90 are local ones.

2. Specialists of the information center of the Ministry of Health and Medical Industry of Turkmenistan have made recommendations on how to protect yourself from the sun's rays on hot days.

3. The Pension Fund of Turkmenistan informed citizens of the country via SMS that now state pension insurance contributions can be paid online on the official website of the Ministry of Labor and Social Protection of the Population of Turkmenistan.

4. A team of girls from Turkmenistan, Electric Currents, developed the ClearVision mobile app, which can test vision and give advice on how to improve it. The app includes features such as an eye test, exercises and exercises for the eyes, tips for good nutrition and good habits, and interesting information about eye health.

5. The economic society “Bereketli”, known in Turkmenistan for its meat and sausage products, has expanded the range of products, among the new products are chicken ham, beef stew and sausages “Chemen”.

6. The head of the Republic of Tatarstan, Rustam Minnikhanov, posted a photo of his dog, a Turkmen Alabay named Akdus, on his Telegram channel. “This is how our Akdus has become. He grew up into a big, strong, kind dog! Minnikhanov shared with his subscribers.

7. A Consultative Meeting of the Heads of State of Central Asia will be held in Cholpon-Ata on July 20-21. The President of Turkmenistan Serdar Berdimuhamedov will participate in the forum.

8. They say that repairs cannot be completed, they can only be stopped. This is true, but only in part. If desired, endless repairs can be avoided if you know the reasons for which delays most often occur. This article contains top tips on how not to delay repairs for a long time.

10. From July 18, bus service between Uzbekistan and Russia, which was interrupted two years ago due to the COVID-19 pandemic, is being resumed. Flights Tashkent - Moscow will be operated twice a week on Mondays and Thursdays, Tashkent - Kazan - on Tuesdays and Fridays, Tashkent - St. Petersburg - on Wednesdays and Saturdays.

11.Matches of the fourth round of the championship of the Central Asian Football Association (CAFA) among women's national teams were played in Dushanbe.In the next round, the main contenders for the “gold” - the national teams of Uzbekistan and Iran won big victories.

The team of Uzbekistan prevailed over Kyrgyzstan (7:0), and the players of Iran were stronger than the national team of Turkmenistan (4:0).

12. The crew of the Russian team of racers “KAMAZ-master” under the leadership of pilot Dmitry Sotnikov won the final stage of the “Silk Road” rally-raid in the standings of trucks. For Sotnikov, this victory was already the fourth in the marathon, he had previously won first places in 2013, 2017 and 2021.