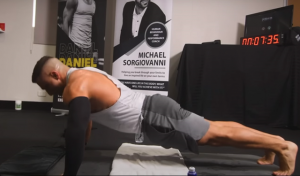 According to the record holder, he had to overcome the discomfort caused by complex regional pain syndrome, which he developed after he broke his arm as a teenager. Daniel Scali broke last year’s record of Jarrad Young, who did 3054 push-ups in 60 minutes.

The ceremonial graduation of lieutenants was held at the State Migration Service of Turkmenistan, “Turkmenpost” improves the work of the courier service and other news
All participants of the 2022 World Cup in Qatar became known
Turkmenistan Elected Vice-President of 77th UN General Assembly
Turkmenistan will resume external transport links, a new car of the President of Turkmenistan, the best school director has been named, the quota for education in Russia has been increased and other news
Turkmenistan was represented at the “Pearl of the World-2022” competition, mega-realistic cakes by an Ashgabat confectioner, a joint Russian-Turkmen university and other news
Asian Sambo Championship in 2023 will be held in Kazakhstan