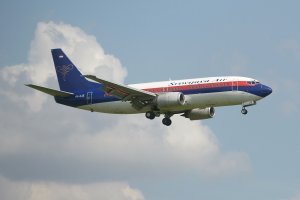 President Gurbanguly Berdimuhamedov sent his deepest condolences to the President of the Republic of Indonesia, Joko Widodo, in connection with the crash of the Sriwijaya Air passenger plane, which caused numerous casualties, the Vatan news program of Turkmen television reported.

On behalf of the people and the Government of the country, as well as on his own behalf, the President of Turkmenistan conveyed words of sincere empathy and support to the families and friends of the victims at this difficult moment.

The Boeing 737-524 of the local airline Sriwijaya Air operated on Saturday from Jakarta to Pantianak (the capital of West Kalimantan province), carrying 50 passengers, 6 crew members, and 6 airline employees. About four minutes after taking off from the capital’s airport, the plane crashed into the Java Sea. Everyone on the plane died.

As the representative of the Agency of meteorology, climate and geophysics, Dani Saptiadi, told reporters today, the Boeing 737-524 crashed in Indonesia during takeoff passed through a thunderstorm front and found itself in a zone of strong turbulence.

Meanwhile, one of the fishermen from Lankang Island told CNN Indonesia that the plane exploded in the air, and he himself heard the explosion in the sky, and then saw burning debris falling into the sea.

According to the Flightradar24 portal, the flight, which turned out to be fatal, was performed by an airplane that made its first flight in 1994.