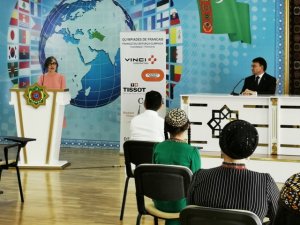 The Olympiad, which took place from 12 to 21 April, gathered about 300 Ashgabat schoolchildren from:

The theme of the Olympiad is “a breath of air!” is also the theme proposed by the French Ministry of Culture for the 26th World Week of French and Francophonie.

Writing competitions in the form of a dictation on the topic of ecology and a test on inspiration and creativity were held in each educational institution during classes in cooperation with the city committee responsible for the examinations. Following them, oral final tests on the topic of travel and excursions were organized by the French Institute online.

In the category of 4th and 5th grades, the prize places are distributed as follows:

In the 7th and 8th grade categories, the winners are:

In category 9th grades, the prizes were won:

The laureate diplomas were signed jointly by the Ministry of Education of Turkmenistan and the French Embassy.

Each schoolchild who took part in the first French Olympiad in Turkmenistan was presented with a T-shirt with the words “French in Central Asia” from the French Embassy.

All finalists also received a bag and a glass.

French is the second most in-demand language in the world after English. According to the international organization “Francophonie”, the number of people who speak French is about 274 million, and 130 million are studying it.