Erikson moved to “Manchester United”, “Zenit” misstopped in Himki, Meyveser named the price for which he is ready to return to boxing: sport press review 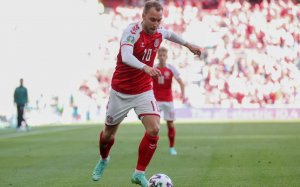 Danish midfielder of “Brentford” Christian Eriksen become the “Manchester United’s” player. It was reported by “Chempionat” with reference to the press-service of the Mankunians. The contract with Eriksen meant for June 2025.

Last season, the Dane was recovering from heart surgery during which a cardiaс pacemaker was set up. Christian joined “Brentford” only in the second part of the English Championship. In 11 matches of the English Premier League, he scored one goal and made four assists.

“Zenit” drew with “Himki” (1:1) in the away match in the 1st round of the RPL.In the 17th minute, the score in the match was opened by Wendel, on the 84th - Reziuan Mirzov scored.

The St.Petersburg club did not win in the first round of the Russian Championship for the first time since the 2016/17 season, reports sports.ru.

The wards of the coach Sergey Semaka in the Championship opening match 2016/17 also shared points by drew with “Lokomotiw” (0:0). As a result, in that season “Spartak” (69 points) won the RPL, and “Zenit” (61 point) took a third place in the tournament table.

Former Worlds Champion in five divisions Floyd Mayweather Junior revealed the fee for which he is ready to return to boxing, reports sportbox.ru referring to the MMA News channel.

“This year I will have three exhibition fights. I know that they will continue to pay me, but if we talk about a professional fight, we will talk about 200 million US dollars,” the boxer said.

It should be noted that in his professional career, Mayweather has fought 50 fights and won 50 victories.

The crew of the “KAMAZ-Master” team under the lead of Russian Dmitriy Sotnikov became the winner of the ninth, penultimate stage of the Silk Road rally raid in the truck standings, RIA Novosti reports.

All pilots represent “KAMAZ-Master”. “The Silk Road” Rally will last until July 16, the finish will be in Moscow at the “Luzhniki” Stadium.

The head coach of the Italian national hockey team Greg Ireland has become the new head coach of “Kunlun”, “sport-express” reports. Details of the deal with the 56-year-old specialist were not disclosed.

Last season, Ireland worked at “Bolzano”, and also led the Italian national team at the 2021 and 2022 World Cups.