FlyDubai resumed regular flights to Ashgabat, Turkmenistan extended the contract for the supply of electricity to Afghanistan, the number of Turkmen students at Saratov University increased several times and other news 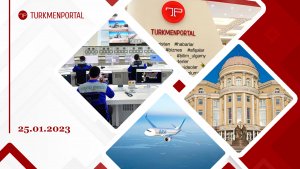 1.From January 24, 2023, the FlyDubai airline resumed regular flights from Dubai to Ashgabat.Flights were suspended in the spring of 2020, when restrictions were introduced due to the COVID-19 pandemic.

In accordance with the issued permits, the airline will operate direct regular flights from Dubai to Ashgabat on Mondays and Thursdays, and flights from Ashgabat to Dubai will be operated on Tuesdays and Fridays.

2. In Ashgabat, the “Turkmenenergo” State Electricity Corporation and Da Afghanistan Breshna Sherkat (DABS), the national electricity company of Afghanistan, signed an agreement that extends the contract for the supply of Turkmen electricity in 2023.

This was announced by SSU Vice-Rector for International Affairs during his visit to Ashgabat.

4.Ambassador of Turkmenistan to Yerevan Muhammetgeldy Ayazov met with Deputy Foreign Minister of the Republic of Armenia Mnatsakan Safaryan.The parties discussed the holding of the Days of Culture of Turkmenistan in Armenia, the events dedicated to the 300th anniversary of the Turkmen poet Magtymguly, as well as the intensification of contacts between the Institute of International Relations of the Ministry of Foreign Affairs of Turkmenistan and the Diplomatic School of the Ministry of Foreign Affairs of Armenia.

The report also notes that the event will be held in the exhibition hall of the Chamber of Commerce and Industry of Turkmenistan.

By another Presidential Decree, Bally Ballyev was released from his post as hyakim of the Karakum etrap of the Mary velayat. Merdan Orazmuhammedov has been appointed to this position.

8.Singer Beyoncé received a fee of 35 million USD for one performance at the opening of the Atlantis The Royal hotel in Dubai.During the hour-long performance, the pop singer managed to transform several times, changing costumes and stage images.

The guests of the presentation were world stars and celebrities.The Atlantis The Royal hotel was built on the artificial island of Palm Jumeirah, in one of the most prestigious areas of the largest city in the UAE.

9.Doctors have been talking about a real obesity pandemic for years.The experts decided to analyze the overweight situation around the world and identify the countries with the thinnest and fattest populations.

According to the Daily Mail, the most obese people live on the Pacific island of Nauru.As for the countries where the thinnest people live, Vietnam is in the lead here. 10. “PSG” striker Kylian Mbappe scored five goals in the 1/16 finals of the French Cup against the “Pays de Cassel”, which ended 7-0 in favor of the Parisians.

The striker scored a penta-trick for the first time in his career.Before that, his best record was 4 goals in one match, and the player did it twice.

The lot is estimated at 1,4-2 million euros.Michael Schumacher suffered a severe head injury in an accident at the end of 2013.His current condition is being kept under wraps.

The German pilot is a seven-time “Formula 1” champion.