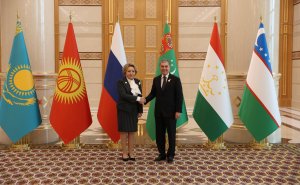 Chairman of the Halk Maslahaty of Milli Gengesh of Turkmenistan Gurbanguly Berdimuhamedov accepted the invitation of the Head of the Federation Council of the Federal Assembly of the Russian Federation Valentina Matvienko to visit Russia.

The meeting of the Heads of the Upper Chambers of Parliaments took place on the sidelines of the Inter-Parliamentary Forum of the states of Central Asia and the Russian Federation, organized by Ashgabat.

"The Speaker of the Federation Council invited Gurbanguly Berdimuhamedov to visit Russia.She noted that it would be important to have such a visit already this year, taking into account the celebration of the 30th anniversary of the establishment of diplomatic relations by the two countries, and suggested that the program of the visit of the Chairman of the Halk Maslahaty of Milli Gengesh of Turkmenistan to the Russian Federation should include a visit not only to Moscow, but also to one of the Russian regions.

The Head of the Federation Council thanked the host party for the high organization of the Forum and the traditional Turkmen hospitality, expressing the conviction that holding such meetings contributes to further deepening cooperation among the Parliaments of the Central Asian states and promoting common positions in the international arena.

Confirming the mutual interest of Turkmenistan and Russia in further building up political, diplomatic, economic, cultural and humanitarian relations, the Chairman of the Halk Maslahaty of Milli Gengesh and the Speaker of the Federation Council spoke in favor of expanding mutually beneficial partnership, both at the governmental level and between individual state and business structures, as well as the activation of the Intergovernmental Commission.

At the meeting, particular attention was paid to the Inter-Parliamentary ties on the extensive agenda of bilateral relations, including between relevant Committees as well as on international platforms.

In this context, the importance of the Inter-Parliamentary Forum of Central Asian states and Russia held in the Turkmen capital, designed to promote friendship, cooperation and mutual understanding among the states of the region and the Russian Federation, was emphasized.

Gurbanguly Berdimuhamedov expressed gratitude for the idea to give the Inter-Parliamentary Forum of Central Asian states and Russia a regular nature and designate its name as the "Ashgabat format". He also confirmed the readiness of the Turkmen party to establish a Permanent Secretariat of this Forum in Ashgabat.

The parties also noted the importance of the Cooperation Agreement between the Upper Chambers of the Parliaments of the Russian Federation and Turkmenistan signed today and agreed to instruct the relevant Committees of the respective Chambers to draw up a joint roadmap for its actual implementation.