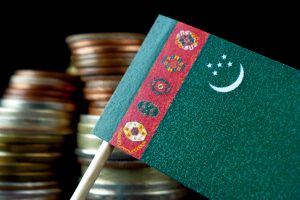 The economy of Turkmenistan grew exponentially during the first part of Berdimuhamedov’s presidency from 2007 to 2014 due to a higher volume of gas exports, as well as record-breaking high gas prices, which helped generate billions of dollars from exports.

The country’s economic output has significantly declined since 2015 due to lower prices of natural gas and the discontinuation of gas exports to Russia and Iran.The second part of Berdimuhamedov’s presidency was marked by economic crisis, inflation, and soaring black-market exchange rates.

The nominal GDP of Turkmenistan under the presidency of Berdimuhamedov grew from $12.66 billion in 2007 to $45.23 billion in 2019, according to World Bank figures.GDP growth rates have not been updated on the Bank’s website since 2020 due to a lack of reliable data of adequate quality.

Therefore, one can assume that the actual GDP of the country might be completely different — and far lower — had it been reported based on the black market exchange rate.

The black-market exchange rate is not the product of Berdimuhamedov’s presidency, its advent stretches back to the era of the first president, Niyazov (also called Turkmenbashy, meaning “The leader of Turkmens”).

Selling and buying foreign currencies was forbidden during the Niyazov era starting in 1998 and such restrictions were lifted in the second year of Berdimuhamedov’s presidency in 2008.

Albeit with some restrictions on the amount of dollar exchange, the exchange of currencies was largely allowed to all citizens.The exchange rate was set at a fixed rate, first at 2.8 manat/$1, and later at 3.5 manat/$1.

As a result, living standards improved in the country thanks to the cheap exchange rate, which helped average citizens afford imported cars, electronics, and other products.

However, the free exchange of currencies has been severely restricted since 2016 due to the lower number of hard currencies coming into the country, which was a result of declining prices of natural gas and the discontinuation of gas exports to Russia and Iran.

Restrictions on the free exchange of currencies paved the way for the rise of yet another black market exchange rate in Turkmenistan but this time under the presidency of Berdimuhamedov.

As a result of the growing black market exchange rate, everything became more expensive, and inflation soared in the country.Turkmenistan has not yet undergone full industrialization and domestic production is too low to meet the demands of consumers.

Due to the cheap exchange rate in the first half of Berdimuhamedov’s presidency, the country largely imported the majority of its consumer products.

Although the government does not publicly share any data regarding inflation rates in the country, one can glean information about inflation in Turkmenistan from international organizations, academics, and alternative third-party sources.

The “Palaw Index” from Progres.online measures monthly inflation in Turkmenistan by tracking the price of ingredients for the famous Turkmen dish palaw such as sunflower oil, beef, onions, carrots, rice, and flour.

According to the Palaw Index, year-on-year inflation was 45 percent in January, 20 percent in February and 16 percent in March of 2022.

The beginning of Berdimuhamedov’s presidency was marked by high economic growth caused by high gas prices and larger volumes of exports until 2014.However, instead of investing the extra revenue gained through gas exports in those years toward health, education, and hard infrastructure, the government wasted almost all of the revenue on building monuments, airports, luxury hotels, and the underused Awaza tourist zone, as well as hosting the AIMAG.

Despite high growth in the beginning, high inflation and a soaring black-market exchange rate became the legacies of Berdimuhamedov’s time in office.

Gender and the Bolsheviks: A Contested Legacy
Islam, the State, and Security in Post-Soviet Central Asia
Francisk Skorina's Book Legacy to be presented to the State Library of Turkmenistan
Turkmen President, International Companies Discuss Investments in Turkmenistan