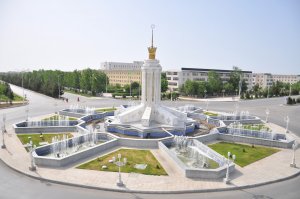 A round table on the issues of integrating a gender perspective in the country was held in Lebap velayat for representatives of law enforcement agencies of Turkmenistan with the participation of the Women's Union. About this reports the publication “Turkmenistan: Golden Age”.

The participants discussed the implementation of the gender policy of Turkmenistan, relevant legal documents in this area, in particular, the National plan of the country, a comprehensive document reflecting the international obligations of Turkmenistan in the field of gender equality.

Particular emphasis during the meeting was placed on the promotion of an intersectoral approach to gender issues based on the participation of many stakeholders.

In this regard, representatives of the Women's Union of Turkmenistan spoke about comprehensive measures aimed at ensuring the participation of women in the public and political life of the country, and also expanding their opportunities in the economic sphere.

The round table was held by the OSCE Center and is part of a series of events held in Ashgabat, Mary and Balkan velayats. In October, such a round table will be held in the northern region of Turkmenistan.

Exhibition of paintings by teachers of the Academy of Arts will open in Ashgabat
Turkmenistan: Just passing through
Inclusive events will be held in the international Day of Older People in Ashgabat
Turkmenistan will celebrate the Day of Construction and Industrial Workers for the first time
Turkmen environmental control specialists have mastered the use of the “ATMAS” air analyzer
A meeting to reduce the risks and threats to youth, caused by the global pandemic was held in Turkmenistan