Masdar will launch a solar photovoltaic project in Turkmenistan, the Days of Culture of Tajikistan have started in Ashgabat, the law on circus art has come into force in Turkmenistan 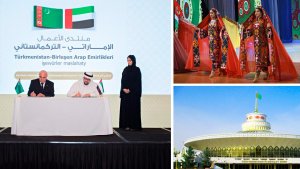 1. Turkmenistan's state energy corporation “Turkmenenergo” and Masdar from the UAE signed an agreement on the development of a project for a solar photovoltaic installation with a capacity of 100 megawatts. This will be Masdar's first project in Turkmenistan.

2.The opening ceremony of the Days of Culture of Tajikistan was held at the Mukams Palace of the State Cultural Center of Turkmenistan.Solemn speeches were made by the heads of the ministries of culture of the countries organizing the creative forum.

The evening was opened by a choreographic composition performed by well-known Tajik groups - the State Dance Ensemble “Lola” and the dance ensemble “Parastu”.

3.The law “On Circus and Circus Art” came into force in Turkmenistan.The document defines the legal and socio-economic foundations of state policy in the field of circus and circus art, regulates relations arising in connection with the creation and public display of circus performances, determines the legal basis for the activities of circuses and the forms of its state support, and is also aimed at the aesthetic education of citizens, satisfaction of their creative needs and protection of interests in circus art.

4.The banks of Turkmenistan are preparing to conduct an independent audit for 2022 in accordance with the requirements of international financial reporting standards.Announcements on holding international tenders for audit services have already been published by the State Bank for Foreign Economic Affairs of Turkmenistan, JSCB “Senagat” and “Turkmen-Turkish” joint-stock commercial bank.

Conducting an independent audit of financial statements allows banks to confirm the effectiveness of their activities and attract new partners.

5.On December 6, from 9:00 to 12:00, a job fair will be held in the building of the Union of Industrialists and Entrepreneurs of Turkmenistan.

The event is organized by the department of labor and employment of the population of the Kopetdag etrap together with the Ashgabat city committee of the Party of Industrialists and Entrepreneurs.

Those who wish to find a job must have a passport with them, as well as certificates confirming their education and skills.

6. Billionaire Bill Gates, known for his passion for reading, has named a few books that he would recommend to anyone. Gates' recommendations include “Stranger in a Strange Land” by Robert Heinlein, “Team of Rivals” by Doris Kearns Goodwin, and “Mendeleev's Dream” by Paul Strathearn.

7.A tourist who climbed the pyramid of El Castillo in Mexico was pelted with bottles of water by the locals.This pyramid is one of the world's most famous historical monuments left over from the Mayan culture.

Since 2008, climbing it has been banned for everyone, tourists and local residents, for this they face a fine of 2,5 to 5 thousand dollars.The tourist, who dared to break the ban, climbed to the top of the pyramid and began to dance there.

All this time, a crowd of local residents, shouting and threatening, tried to force her to go down.When the woman nevertheless began to descend, plastic bottles flew at her and threats to take her to the police.

8.Turkmenportal talked to football player Ruslan Mingazov on the eve of his birthday to find out what it means to be the only Turkmen player in the Hong Kong Championship, where he will celebrate his 31st birthday when he returns to his native Ashgabat, and what it feels like to wear a national team jersey.

One of the best football players in Turkmenistan, a player who has experience playing in the championships of Latvia, the Czech Republic, Kazakhstan and Hong Kong, was born on November 23, 1991 in Ashgabat.

The editors of Turkmenportal heartily congratulate Ruslan Mingazov on his birthday and wish him all the best for a long and happy life.

9.In Qatar, the fourth day of the World Cup ended, in which representatives of groups E and F entered the football fields.The national teams of Morocco and Croatia played a draw with a score of 0:0.

The Japanese team defeated the German team with a score of 2:1.Spain confirmed the status of one of the favorites against Costa Rica, scoring them 7 unanswered goals, while Belgium achieved a minimal victory over the Canadian team - 1:0.

Turkmenportal signed a Cooperation Agreement with UNDP, a train with auto parts from China will pass through the territory of Turkmenistan, fashion week ended in Ashgabat
Winners of international sports competitions will be awarded in Turkmenistan, excise rates on the import of tobacco products have increased, a group of pilgrims returned to homeland
“Turkmenistan” Airlines has operated a flight from Kazan to Turkmenabat for the first time, an auction for the sale of state property of Turkmenistan will be held on a digital platform, a selection of photos for May 2022, the season of children’s camps ha
“Suliko”, “Tbilisi” and other songs of sunny Georgia will be performed by Turkmen musicians
CJSC “Turkmen Investment Company” invites businessmen to cooperate
School desk and boards from Aýbölek will go to Kazakhstan