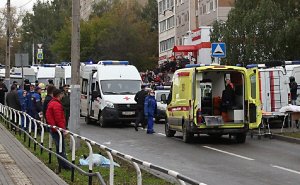 The President of Turkmenistan Serdar Berdimuhamedov sent sincere condolences to the President of Russian Federation Vladimir Putin in connection with the tragedy that occurred at school № 88 of the city Izhevsk which resulted in numerous human causalities, most of them innocent children, and injuries, announced the news program “Watan” of Turkmen television today.

On behalf of the people and the Government of the country, and also on his own behalf, the head of Turkmenistan conveyed words of empathy and support at this difficult moment to all the relatives and friends of the victims, and also whishes for a speedy recovery to the injured.

On September 26, at school № 88 in Izhevsk, a 34 years old graduate of the school, who was registered in a psychoneurological dispensary with a diagnosis of “schizophrenia”, opened fire, and then committed suicide.

According to the authorities of Udmurtia, who refer to the Investigative Committee of the Russian Federation, 17 people died as a result of the shooting, including 11 children.Three teachers were among the dead: a fine art teacher, a math teacher and an English teacher.

The Government of Udmurtia reported that family members of those killed in the shooting would receive 1 million rubles each.

From September 26 to 29, mourning for the dead was declared in the region.