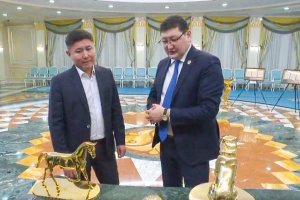 The press secretary of the President of Kazakhstan Berik Uali, during a TV report from the Akorda residence, named the most special and original gift to Kassym-Zhomart Tokayev, newtimes.kz reports.

As Berik Uali further said, the Ahal-Teke horse has been trained and is looked after in a special equestrian center. The president himself rides a horse named Ganatly (Winged).

While receiving the gift during his visit to Turkmenistan, Kassym-Zhomart Tokayev told Gurbanguly Berdimuhamedov that he would personally control and check his condition.

As for the Tazy puppy, which was presented to the President of Kazakhstan by the Turkmen Deputy Prime Minister Serdar Berdimuhamedov, it will be used in hunting. Berik Uali noted that the head of state already has his own six-month basins - Aktas and Zhebe.

The Akord residence also contains souvenirs from the President of Turkmenistan, presented as part of the state visit of Kassym-Zhomart Tokayev to Ashgabat. These are sculptures of small plastic, depicting the Turkmen Alabai and Ahal-Teke horse.

The Akord residence stores gifts made to the leader of Kazakhstan by the heads of state and high-ranking officials for three years. At the moment, there are more than a hundred such gifts.

According to Berik Uali, there is an album here, presented by the President of the Russian Federation Vladimir Putin in honor of the 75th anniversary of the Victory.There is also a gift from the President of Bashkortostan R.

Khabirov, who arrived on a visit to the country at the end of September.He presented the panel "Falcon".Also in the residence you can see an interesting and unusual special gift - a painting "The Golden Man" in 3D format.

It was presented by the President of Belarus Alexander Lukashenko last year.

President of Uzbekistan Shavkat Mirziyoyev, as part of his recent visit to Kazakhstan, presented Kassym-Zhomart Tokayev, in addition to souvenirs, a mini-bus.

The press secretary also said that the administration of the President of the Republic of Kazakhstan is engaged in collecting all other gifts for the president and transfers the gifts to the national museum, the source notes.