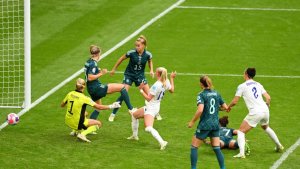 Football players of the England national team won the final of the European Championship, defeating the German team in the decisive match, RIA Novosti reports.

The meeting, which took place in London at Wembley Stadium, ended in favor of the English with a score of 2:1. As part of the winners, Ella Tun and Chloe Kelly scored goals. The Germans scored Lina Magull.

England midfielder Kira Walsh was named Player of the Year. Englishwoman Beth Mead and German Alexandra Popp were recognized as the most productive players of the tournament, having scored 6 times each.

Previously, the England women's team reached the final twice, but lost both times - in 1984 and 2009. The German national team players have won the tournament eight times, despite the fact that up to this point they had never lost in the finals.

The scientists told, if the coronavirus infected people could be contagious
England vs Germany will play in Women's European Championship final
In England, due to the energy crisis, the start time of football matches will be changed
The women’s football team of Turkmenistan entered the FIFA rating for the first time
At the European Football Championship, all quarterfinalists were determined
The construction of a university of the UIET was launched in Ashgabat, by the end of 2022 Turkmenistan will send about 3 thousand tons of road bitumen to Uzbekistan, the reception of citizens on legal issues will be held on July 23