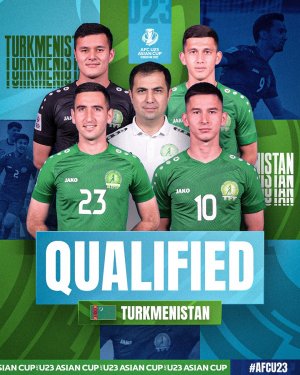 The youth national football team of Turkmenistan drew with Qatar in the final match of the group stage of the Asian Cup-2022 (under 23).

The meeting held today in Tashkent has finished with a score 2:2. Osama Al-Tairi scored a double for the Qataris (65th and 73rd minutes). Begenchmurad Muradov scored twice in the national team of Turkmenistan (75th and 85th minutes), who came on as a substitute.

The youth national team of Turkmenistan became second with four points and will play with the Australian national team in ¼ final. The Qatar team (the fourth place, two points) finished the performance at the tournament. The first place in the group was taken by Uzbeks (7 points), the third were Iranians (2).

The team from Turkmenistan for the first time in history will play in the playoffs of the Asian Youth Cup-2022 (under 23). For the country, such an achievement is historic.

Uzbek Leader Congratulates Turkmen President on His Birthday
Rise in Number of Turkmen Citizens Renouncing Citizenship
Presidents of Turkmenistan, Uzbekistan to Meet in October
Export Trades at Turkmen Exchange For September 19-24: $7.5 Million
Turkmen President Receives Congratulations on 31st Anniversary of Independence
The Asian Futsal Cup 2022 starts in Kuwait with the participation of the national team of Turkmenistan