The President of Turkmenistan held a working video conference 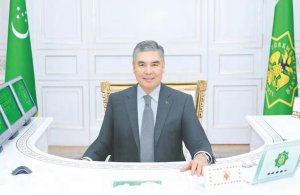 The tasks of implementing the strategy of socio-economic development of the capital and regions, cardinal reforms launched in the agro-industrial complex, as well as other topical issues of state life were put on the agenda of the working meeting, which was held today by digital video link of President Gurbanguly Berdimuhamedov.

According to the State news Agency of Turkmenistan, the meeting was attended by some Deputy Chairmen of the Cabinet of Ministers, as well as hyakims of velayats and the city of Ashgabat.

The first speaker was the hyakim of Ashgabat Ya. Gylydjov, who reported on the situation in the capital, measures for its further improvement, maintenance of heating networks in proper operational condition, taking into account the cold snap. It was also reported on the progress of construction of various facilities being built in the main city of the country.

After hearing the report, the leader of the nation Gurbanguly Berdimuhamedov stressed that next year our country will celebrate the 30th anniversary of independence, and gave instructions for completing the construction of facilities planned for commissioning in honor of this significant date on time and with high quality.

Then the meeting heard the reports of the hyakim of the Akhal velayat Ya.Gurbanov, hyakim of the Balkan velayat T.Atahalliyev, hyakim of the Dashoguz velayat N.Nazarmyradov, hyakim of the Lebap velayat Sh.Amangeldiev, hyakim of the Mary velayat D.Annaberdiev, who reported on the state of affairs in the regions entrusted to them and implementation of data informed the head of state orders, in particular, to establish coordinated activities of public utilities, to ensure in winter the stable heating of residential houses, preschool, educational and medical institutions, smooth operation of systems elektro - and gas supply of all settlements.

As part of the reports, it was reported about preparations for a worthy meeting of the upcoming 25th anniversary of Turkmenistan's neutrality, acceleration of construction of various facilities provided for in the National rural program and the Presidential Program for socio-economic development of the country for 2019-2025.

Heads of regional administrations also reported on the progress of seasonal agricultural campaigns, including cotton harvesting, winter wheat care, expansion of land for potatoes, vegetables and other popular crops.

At the same time, preparations for spring sowing have begun, and steps are being taken to put in order agricultural machinery and equipment that will be used in the upcoming harvest. Landscaping works are also underway to plant new seedlings on time.

After hearing the reports, the head of state Gurbanguly Berdimuhamedov drew attention to the fact that the issues of social security of the population should always be in the field of view of the regional authorities.

Emphasizing the importance of timely implementation of seasonal agricultural measures, the head of Turkmenistan pointed out the need for careful care of wheat seedlings for the 2021 harvest, as well as the complete completion of cotton harvesting and high-quality processing of the obtained valuable raw materials.

Attention should also be paid to increasing the production of potatoes, vegetables and other agricultural crops in order to meet the needs of the population for these products and strengthen the foundations of food abundance.

Separate orders were given to prepare for the New year.

Then, addressing the hyakims of the capital and velayats, President Gurbanguly Berdimuhamedov again touched upon the topic of the onset of the cold season, emphasizing that during this period, it is necessary to strengthen awareness among the population to strengthen immunity and prevent seasonal diseases.

In order for the human body to adapt to the winter season in a timely manner, it is necessary to follow comprehensive preventive measures, in short, to lead a healthy lifestyle, the head of state said, giving specific instructions in this context.

Then the leader of the nation called the deputy Chairman of the Cabinet of Ministers E.Orazgeldiev, who is in charge of the agro-industrial complex, by direct video link.

The Deputy Prime Minister reported on the state of affairs in the industry, complex works currently being carried out on agricultural fields and livestock farms, and comprehensive preparations for spring sowing.

The Deputy Prime Minister also said that in order to attract private producers to agricultural production, together with the velayat khakimliks, appropriate work was carried out to create special land funds for cultivation in the regions, in total, on 264 thousand 678 hectares of land of the above-mentioned crops.

Land plots are proposed to be provided to producers for use for a period of 99 years for growing wheat, cotton and other agricultural crops included in the state order on a contractual basis on 70 percent of the stipulated areas, and the remaining land can be sown with other crops for conducting a scientifically based crop rotation.

After hearing the report, the President of Turkmenistan focused on the importance of strengthening food abundance in the country, where the current tasks are to increase land fertility, increase agricultural production and expand the types of cultivated crops.

Speaking about this, the head of state signed a Decree on approving the volume of the special agricultural land Fund, sending it to the Deputy Prime Minister and the hyakims of the velayats on the electronic document management system.

President Gurbanguly Berdimuhamedov gave a number of specific instructions to the Deputy Prime Minister and the hyakims of the velayats, emphasizing the need to introduce the latest technologies and advanced scientific achievements in agriculture, as well as an organic combination of modern experience with national farming traditions.

Then deputy Chairman of the Cabinet of Ministers CH.Gylyjov reported on the festive events held in various parts of the country on the occasion of the 25th anniversary of Turkmenistan's neutrality, ensuring a high organizational level of industry exhibitions that will be held from December 1 to 12 in honor of the significant date.

The expositions will demonstrate the achievements of each industry, including the introduction of the latest technologies and digital systems into production in accordance with the initiatives of the leader of the nation, as well as samples of various domestic competitive products.

The Deputy Prime Minister also reported on preparations for organizing a festive exhibition in the velayats and the capital, which will be held on December 10.The exhibition will reflect the successful solution of tasks arising from the Presidential Program for socio-economic development of the country until 2025, the National rural program, and will present a variety of agricultural and livestock products.

The review, timed to the glorious date, will also provide an opportunity to get a clear idea of the scale of construction work that has unfolded in all corners of Turkmenistan, and the steps being taken to build the capacity of the processing industry based on the development of local raw materials.

After hearing the report, President Gurbanguly Berdimuhamedov noted that holding specialized exhibitions is of great importance for the dynamic and diversified development of the economy with access to its new directions, exchange of experience, and introduction of innovative technologies into production.

At the same time, the results of targeted measures to improve the standard of living of the people should be demonstrated in the festive expositions, large-scale reviews should comprehensively present the work carried out in all spheres of the national economy, the transformations carried out in the velayats, including the construction of various facilities, and our achievements in ensuring food abundance, the leader of the nation said.

When organizing exhibitions, it is also necessary to pay attention to projects of international significance implemented by Turkmenistan, in particular, on the formation of transport and communication infrastructure.

As part of the expositions, it is necessary to create an effective platform for the mutually beneficial exchange of experience, identifying specific areas for solving the tasks set, the President of Turkmenistan stressed, addressing the Deputy Prime Minister and the hakims with relevant instructions.

The President of Turkmenistan made a working trip to Ashgabat
140 families of Ashgabat residents will celebrate housewarming on the occasion of the 140th anniversary of founding the capital city
25.01.2021 | Registration of national observers for the upcoming elections
Berdimuhamedov inspects construction of the Ashgabat-Turkmenabat highway
The President of Turkmenistan held a meeting of the Cabinet of Ministers
Turkmenistan: Hands across the water
The best song about Ashgabat will be chosen in Turkmenistan