The Revival of Islam in Turkmenistan 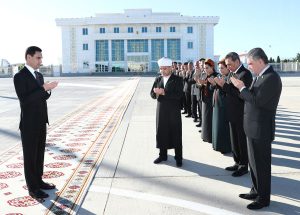 Based on anecdotal evidence, Islam’s popularity has been growing in Turkmen society in the last decade. What explains this apparent rise in religiosity in Turkmenistan?

Islam was introduced to the territories of modern Turkmenistan during the 9th and 10th centuries following the Islamic conquests of Central Asia.According to U.S.government estimates, 89 percent of the country’s population is Muslim (mostly Sunni) as of 2021, while 9 percent of the population is Eastern Orthodox, and the remaining 2 percent identify as “other.” Based on the constitution of the country, Turkmenistan is a secular state, which ensures a separation of religion from the state and its politics.

The constitution also provides freedom of religion and the right of individuals to choose their religion, express their religious beliefs, and participate in religious observances and ceremonies.

During Turkmenistan’s history under the Soviet Union (1925-1991), practicing Islam was heavily restricted for the Turkmen population.Most mosques and religious schools were closed.Soviet officials burned Arabic books and did not allow Muslims to hold political offices.

As a result, Islam was largely removed from public life.By the 1970s, most restrictions on religious practices were somewhat relaxed, yet boundaries were still felt and visible.

For instance, the holy month of Ramadan and other religious holidays were allowed to be celebrated publicly.While some mosques were reopened, religious schools, a large number of mosques, and religious organizations were still restricted.

In the years following the dissolution of the Soviet Union, the first president of Turkmenistan, Saparmurat Niyazov, replaced Soviet propaganda with a nationalistic Turkmen identity, which had some common values with Islam.

Religious celebrations and rituals have been allowed to take place and have been made public holidays in the country.Mosques were also reopened.Nevertheless, religion was still tightly controlled by the state and restrictions have grown tremendously again since independence.

Growing a beard for men, which is encouraged in Islam, was forbidden in Turkmenistan in 2004 and that restriction only loosened in recent years.

According to the 1991 Law of Turkmenistan on Freedom of Conscience and Religious Organizations, all religious groups are required to register with the Ministry of Justice.The registration process is long and tedious.

Muftis, Islamic clerics, are appointed by the government, which effectively allows Ashgabat to control the religious narrative.

Turkmenistan has repeatedly been designated as a Country of Particular Concern (CPC) by the U.S.State Department since 2014 for having engaged in or tolerated particularly severe violations of religious freedoms.

On November 15, 2021, the U.S.Secretary of State again designated Turkmenistan as a CPC, but also once again waived sanctions on account of an unspecified “important national interest of the United States.”

Serdar Berdimuhamedov was inaugurated as Turkmenistan’s new president on March 19, 2022, during continued pandemic-related lockdowns (despite Turkmenistan not officially registering any cases of COVID-19).Soon after, on March 29, Berdimuhamedov issued an order easing the lockdown in the country, including the reopening of mosques that had been closed since the spring of 2020.

The new president signed a decree on April 23, with the aim of pardoning 514 prisoners in honor of the sacred Gadyr gijesi (known as Laylatul Qadr in Islam).

On May 3, Serdar approved proposals from the heads of the country’s five regions for the construction of new mosques.And then Berdimuhamedov made his first foreign trip abroad as president, traveling to Saudi Arabia with the aim of performing a small pilgrimage to Mecca on June 1.

All of these gestures were made within the first 74 days of his presidency.Nephews of the president’s father, former President Gurbanguly Berdimuhamedov, such as Shamyrat Rejepov, and others (who control large industries in the country) started sharing religious posts on their public Instagram accounts on a regular basis after Serdar took power.

Some people claim that the growing inclusion of religion by the political class stems from the rising popularity of Islam among the wider Turkmen society and Serdar is using that to his advantage by using religion as a tool to increase his own popularity.

Although Turkmen have identified with Islam for centuries, the practice and public displays of religion were not that apparent, as Turkmen culture was always prioritized over Islamic practices (despite many similarities).

Victoria Clement notes that Turkmen created intensive and rich religious practices, but those were often mixed with pre-Islamic practices or honed to suit the nomadic lifestyle.However, Islam has become increasingly popular among ordinary and elite Turkmen in the last decade.

Fasting during the month of Ramadan has also become more popular, too.Such a rapid and decentralized rise of Islam among the population has not been seen since the Soviet era.

What Explains the Growing Popularity of Islam Among Ordinary Turkmen?

We can look back to the establishment of Turkish private schools run by the Gulen movement, the first of which opened in Turkmenistan back in 1993, as generating greater general interest in Islam.

In total, the organization opened and ran 17 schools, 10 education centers (teaching foreign languages, math, and technology), and one university in Turkmenistan.These schools were viewed as among the best in the country; they were popular schools of quality for the children of elites.

They taught mainly science and technology, but also introduced and encouraged their students to follow the basic tenets and preachings of Islam.The Gulen schools produced tens of thousands of graduates in the nearly 20 years of their existence before their closure in 2011.

Those who learned at the institutions invariably influenced their family, friends, and neighbors.

Turkey also became the largest receiver of Turkmen migrant workers over the last decade and these migrants brought back what they have learned about Islam to their social networks. Lastly, Turkish TV channels and TV shows have also become more popular among Turkmen, which also taught Turkish culture to the Turkmen audience, along with Turkish understandings of Islam.

Although Islam has been a part of Turkmen culture for centuries, public practice of Islam was largely suppressed during the Soviet Union and in the early independence era, too.

Despite that history, one can observe a revival and rising popularity of Islam among both the ordinary and elite classes of Turkmen society, arguably in part because of deepening connections to Turkish society and Turkish understandings and practice of Islam.

As a result, the country’s new president saw it would be advantageous to tap into that popularity and perhaps enhance his own.