The Turkmenistan national futsal team made into the Asian Cup-2022, visitors of the UIET-2022 exhibition were taken home free of charge, special flights from Turkmenistan to the Russian Federation and Turkey were announced and other news 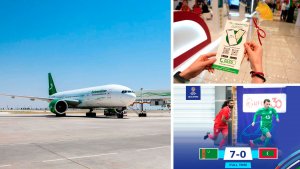 1. The Turkmenistan national futsal team defeated the Maldives team with a score of 7:0 in the final qualifying match for the Asian Cup-2022 and advanced to the final part of the tournament from the second place. The Asian Cup-2022 will be held from September 25 to October 20 in Kuwait.

2. The Onlaýn taksi service in Ashgabat launched a marketing campaign, within the framework of which visitors to the UIET-2022 exhibition could get home for free by downloading a mobile application.

3. The special flights for the export of citizens from Turkmenistan to Russia and Turkey have been announced. The “Turkmenistan” airlines will follow the Ashgabat-Moscow route on April 14, and Turkish Airlines plans to operate a special charter flight on the Turkmenbashi-Istanbul route on April 22.

4. President of Turkmenistan Serdar Berdimuhamedov sent a letter of congratulations to instructor-test cosmonaut Oleg Kononenko on the occasion of the professional holiday celebrated on April 12 Cosmonautics Day. Residents of the Turkmen capital and employees of the Russian Embassy participated in the flower-laying ceremony at the monument to Yuri Gagarin in Ashgabat.

5. Representatives of the Turkmen private business signed 63 contracts with foreign partners for a total of 145 million 398 thousand 770 USD during the exhibition UIET-2022. The contracts were signed online.

6. A higher educational institution of the Union of Industrialists and Entrepreneurs of Turkmenistan will appear in Ashgabat. The start of construction is scheduled for April 2022. And the entire facility will be put into operation in September 2025.

7. The rating of smartphones with the highest level of radiation has been published. The gadgets from Motorola, ZTE, OnePlus, Sony Xperia and Google are in the top 10.

8. The final trailer for “Fantastic Beasts: Dumbledore’s Secrets” has been released. The release video chronicles the development of Albus Dumbledore and Gellert Grindelwald’s relationship. The film has already premiered in several European countries, earning 58 million USD worldwide at the box office.