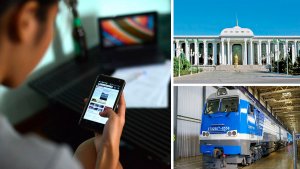 2. 14 new laws were adopted by the Mejlis of the Milli Gengesh of Turkmenistan of the sixth convocation at the 19th meeting held on July 16 in a digital system.

3. The Russian embassy in Turkmenistan reported failures in the pre-registration site. “In recent days, there have been interruptions in the work of the pre-registration site. For technical reasons, applicants cannot confirm their appointments from the waiting list and receive an admission ticket, after which their application on the waiting list is canceled.

4. A new restaurant “The Ostrovsky Lounge” has opened in Ashgabat. The main difference of the new establishment is a rich gastronomic variety. The restaurant is divided into several zones: karaoke, lounge area and terrace. It is available to evaluate the cuisine and atmosphere of the institution at the address: Ashgabat, st. 2060 (former Ostrovsky street).

5.Leading news agencies of the Russian Federation denied the information that appeared in a number of publications on the Internet about the complete blocking of Russian media and TV channels in Turkmenistan. “Websites of Russian media, including TASS, “RIA Novosti”, RBC and “Lenta.ru”, are opening in Turkmenistan without any restrictions”, a TASS correspondent in Ashgabat said in a statement.

6.For the first time, two teams of girls from Turkmenistan reached the world semi-finals of the international competition Technovation Girls - the largest competition for girls in the field of technology-based social entrepreneurship.

During the project, the girls create mobile applications that are aimed at solving some kind of difficulty or problem of the local community, and then present it.

7. According to the World Bank, the planet is on the verge of a real disaster. In 2016, the world generated 2,01 billion tons of solid waste, that is, 0,74 kg per person per day. It is available to learn more about the world experience in dealing with household waste by clicking here.

8. The Ministry of Energy of Uzbekistan asked citizens to use electricity as economically as possible on abnormally hot days in order to prevent malfunctions and failures that may occur due to overloading of electrical appliances.

9. Hollywood actor, star of “The Matrix” and “John Wick” Keanu Reeves will become the host of the project about the Formula-1 racing championship. At present time, he is working on a new documentary series to be released on the Disney+ streaming service.

10. Pilots of the team of the Federation of Automobile Sports of Turkmenistan Merdan Toylyev and Shorhat Toylyev became the winners of the “Silk Road” Marathon in the T2 off-road category. For the crew, this victory was the first in the prestigious marathon. The second place went to Shamurad Gurbanov, the third - to Maksatmurad Danatarov.

11. 14 judoists from Turkmenistan participated in the international tournament of the Grand Prix series, which was held in Zagreb. The best result during the competition was shown by Hakberdy Jumayev, who performed in the weight category up to 60 kg - he took seventh place.