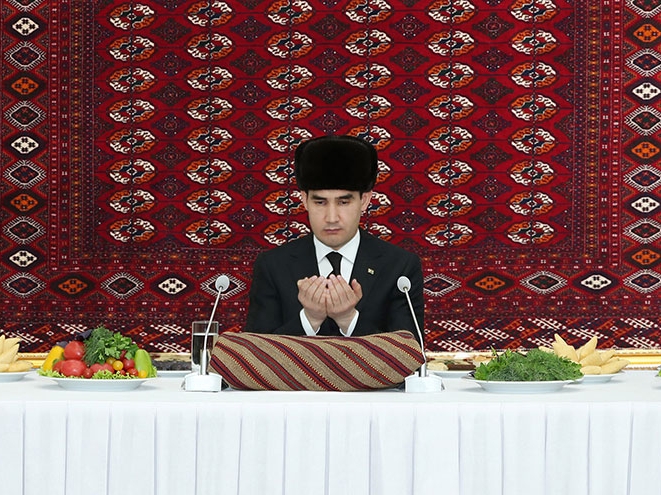 Turkmenistan’s young new president respects his elders and their traditions.That is the message state media is eagerly seeking to telegraph to the public.On April 18, Serdar Berdymukhamedov headed down to the Hazret Omar Mosque in Ashgabat, together with his father, Gurbanguly, from whom he took over power last month, and his son, Kerimguly, to pay tribute to the family patriarch, Myalikguly (Gurbanguly’s father), who died last April at the age of 89.

While at the mosque, Serdar spoke to the mufti about how the country’s elders should ensure the “continuation of centuries-old national traditions and principles.” Centuries might be a stretch, but the younger Berdymukhamedov clearly intends to or is being pressured to, we cannot know for certain slavishly imitate his father in every way that he can stomach.

On April 14, during a trip to the western port city of Turkmenbashi, for example, he engaged in some light sporting activity with his ministers, bringing to mind his father’s love for appearing active.

After cycling around the city, which had been vacated of any actual residents for the occasion, he stopped by a sports center, where he did some light gym work.

There is a strong sense, however, that this Berdymukhamedov is sufficiently self-aware to avoid falling prey to mockery.While ministers flailed humiliatingly in a game of volleyball, he watched from the bleachers with a slight hint of amusement.

The point of these spectacles is ostensibly to propagandize the merits of healthy living.With that in mind, Berdymukhamedov the following day officially inaugurated a new 400-bed hospital in the western Balkan province.

Much was made of the amount of Western-made equipment at the hospital as state television cameras lingered lovingly on items like a Siemens-produced CT scan.Turkmenistan is a dream for any healthcare equipment salesman able to negotiate the hoops of getting into the country.

Profligate governments with dubious healthcare systems invariably buy the most expensive and impressive-looking machinery, little caring for whether medical service providers can put it to good use.Clean, new, white hospital equipment makes for good television footage, and this was no exception.

This hospital in the Balkan province appears to have had a troubled development, though.As Vienna-based Chronicles of Turkmenistan notes, it had been due to open its doors in July 2021, but that deadline was missed.

It is likely that this was a result of travel restrictions imposed over the COVID-19 pandemic.Although Turkmenistan has stuck to the lie that it has not recorded a single case of the coronavirus, the authorities have generally held fast to a number of preventative measures.

That is slowly easing.RIA-Novosti on April 11 reported that theaters are poised to open their doors again, albeit only with 30 percent seat occupancy permitted.In March, just as the holy month of Ramadan was about to begin, mosques reopened too.

Members of the public are still being warned to maintain social distancing and wear masks.This rule does not count for officials and foreign dignitaries, though, judging by television images of Berdymukhamedov’s inauguration festivities last month.

Berdymukhamedov wants more clinics.And the kind he is especially eager to see is yet another tribute to his father, a trained dentist.Addressing Health Minister Nurmuhammet Amannepesov at a meeting after the opening of the hospital, the president observed that the Ashgabat Dental Center has become so popular that another one should be built, perhaps on a spot opposite the city’s emergency ambulance services center.

But as Chronicles points out, there is no free space in the location mentioned, which is occupied by a residential area.The same outlet reports that 300 households in that area were informed that their homes are being earmarked for demolition.

Booting people out of their homes to make space for white elephant projects will, in fairness, preserve another venerable Berdymukhamedov tradition.Repression and censorship will by all appearances be zealously maintained even under this new leader.

The U.S.State Department’s Bureau of Democracy, Human Rights and Labor provided a typically exhaustive rundown of problem areas in its latest country report on human rights practices (or lack thereof) in Turkmenistan.

The list is what one would expect from one of the most austere dictatorships in the world: “unlawful or arbitrary killings … torture or cruel, inhuman, or degrading treatment by police and prison officials … politically motivated reprisals against individuals in another country … serious restrictions on free expression and media, including threats of violence … substantial interference with the freedom of peaceful assembly.” Attention is also paid to the matter of internet censorship, which is becoming ever more topical.

The alarm was raised on April 11 by Amsterdam-based Turkmen.news, which reported that the internet had for a period been blocked altogether.Because internet users have become adept over the years at using ban-circumventing technology like VPNs, state censors have resorted to blocking entire subdivisions of IP networks, the website suggested.

On April 12, RFE/RL’s Turkmen service, Radio Azatlyk, followed up to confirm that internet speeds had cratered and that VPN services were no longer working.The drop-off in speed was noticed by California-based internet services company Cloudflare, which talked in a tweet of a near complete internet shutdown.

A Chronicles reader later speculated that the collapse might have occurred as the result of new internet traffic analysis software used to detect VPN connections being installed.This kind of incident obviously makes a mockery of repeated official claims that Turkmenistan is eager to embrace the values of digitization and all that that entails.

While regular people are closed off to the world, the government keeps the lines open to its foreign partners, although usually the ones of a similarly despotic bent.Turkmen.news has reported that Chinese Defense Minister Wei Fenghe is expected to visit Ashgabat in late April or early May.

Other than pledging a “readiness to strengthen strategic ties and practical military cooperation,” it is uncertain what will be on Wei’s agenda.There is the perennial question of Afghanistan, of course, but it is hard not to note that the Turkmens would be reaching out to Beijing over matters of security cooperation at a time when the Russians, who are widely suspected to be Turkmenistan’s silent security guarantors, are otherwise engaged.

More visits are surely imminent from the leaders of Azerbaijan and Turkey.A three-way presidential summit has been on the cards since 2015, but this may finally be the time.

State newspaper Neutral Turkmenistan on April 15 cited Foreign Minister Rashid Meredov as saying that preparations for a summit, to take place in Turkmenbashi, were in motion, although he tantalizingly did not mention any dates.