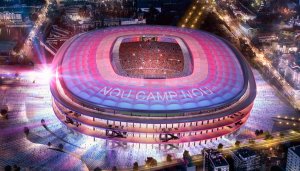 “Barcelona” Football Club has officially announced that it will not play its home matches at “Camp Nou” in the 2023/2024 season. The “Sport-Express” with reference to the press service of the Catalan club reported about this.

The reconstruction will start in June 2022, but “Barca” will still be playing at their arena next season. “Barcelona” will play the 2023-2024 season at the Lluis Companys Olympic Stadium, which hosted the 1992 Summer Olympics.

The capacity of the Olympic Stadium is 55 thousand spectators.Due to the forced relocation, the number of fans who will be able to go to the matches of “Barcelona” will almost halve.

“Camp Nou” is the largest stadium in terms of capacity not only in Spain, but also throughout Europe.The home stadium of “Barcelona” can now accommodate more than 99 thousand spectators.

After reconstruction, the capacity will increase from 99 thousand to 110 thousand.This will make the “Camp Nou” the third largest stadium in the world after the “Narendra Modi” cricket stadium in India (132 thousand) and the First May Day in North Korea (114 thousand).

In the summer of 2024, “Barcelona” will return to the “Camp Nou”, but still have to play at 50% of the capacity, because the active phase of work will still continue - and will only end during the 2025/26 season.