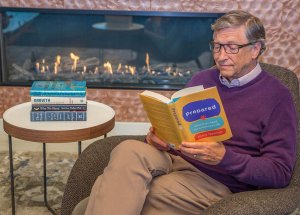 Billionaire Bill Gates, known for his passion for reading, named several books that he would recommend for everyone to read, writes “Komsomolskaya Pravda”.

Among the recommendations of Gates is the book “Stranger in a Strange Land” by Robert Heinlein, about a man who grew up with the Martians, and later went to Earth and trying to understand the nature of an earthly person, his values.

Gates also spoke with respect about the book “Team of Rivals” by Doris Kearns Goodwin about the 16th US President Abraham Lincoln and about the book “Mendeleyev's Dream” by Paul Strathearn about how exactly the idea of the periodic table of elements came to the great Russian chemist in a dream.

Masdar will launch a solar photovoltaic project in Turkmenistan, the Days of Culture of Tajikistan have started in Ashgabat, the law on circus art has come into force in Turkmenistan
A concert on the occasion of the 85th anniversary of the Children’s Music School was held in Ashgabat
The children's drawing contest Toyota “Dream Car” will be held in Turkmenistan
Tajikistan Dreams of Regional Electricity Grid Rebirth
Natalya Kalugina: scientific and creative search as a life’s formula
08.03.2019 | Celebration hall of the Trade and Industrial Chamber hosts gala concert of art masters