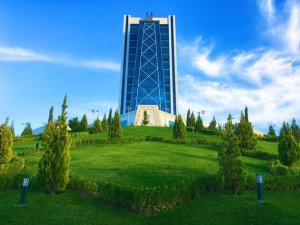 The International University of Oil and Gas named after Yagshygeldi Kakaev is actively developing partnerships with leading specialized research and educational centers in the world, planning to enter the world ranking of the best universities in the future.

Recently, the Oil and Gas University has been closely cooperating with foreign partners in the International Association of Universities (IAU).

Below is an interview with the head of the Department of Cybersecurity of the University Maksat Churiev to the newspaper “Neutral Turkmenistan” about the directions of this cooperation.

- The university has been a member of the IAU since 2013. The partnership carried out within its framework is very productive, as evidenced by a number of international awards, which during this time were awarded to MUNiG. The awards were also presented by the European Quality Assembly of the Socrates Committee of the European Business Assembly (Oxford, UK).

The status awards of the university are a gold medal, an honorary badge and a diploma of the International Competition of the SEIN Association, for a significant contribution to the development of science and education, the training of highly qualified specialists.

Since July this year, the IAU launched the Innovative Education for the Informal Future (IE4UF) project, which consisted of 6 webinars held in a distance format.The last two of them took place on September 30 and October 14.

Each of these sessions was attended by about 600 participants from all over the world, including representatives of MUNiG.In October, the university also took part in a special webinar organized by the IAU, dedicated to the discussion of two sections of the book “Perspectives of Higher Education” and “Coding Values in the Changing Environment of Higher Education”.

Currently, we are working on organizing a meeting with the participation of the management of MUNiG and the International Association of Universities, the format of its holding is being discussed.

Cooperation with them is carried out within the framework of national initiatives, as well as the project of the European Union “Erasmus +”.

Starting from mid-October, the Computing Computer Center of our university, together with the Technological University of PETRONAS (Malaysia), has been conducting distance classes for students of various types of professional training in mastering the skills of using the advanced digital software FreeCAD and others. Classes will run until the end of November.

This month, MUNiG representatives will take part in the “Erasmus +” Virtual Project Fair, as well as the “Turkmenistan Oil and Gas” International Conference.

Universities of Turkmenistan discussed issues of support and development of student science
Results of youth digital innovation competition summed up in turkmenistan
The construction of the “Tashkent” park is nearing completion in Ashgabat, Turkmenistan and Tatarstan are ready to increase trade under the “KAMAZ” and “TATNEFT” projects, a crafts fair will be held in the botanical garden and other news
Turkmen president appoints adviser for oil and gas issues
International expert in oil and gas issues appointed in Turkmenistan
32 new educational areas opened in universities of Turkmenistan