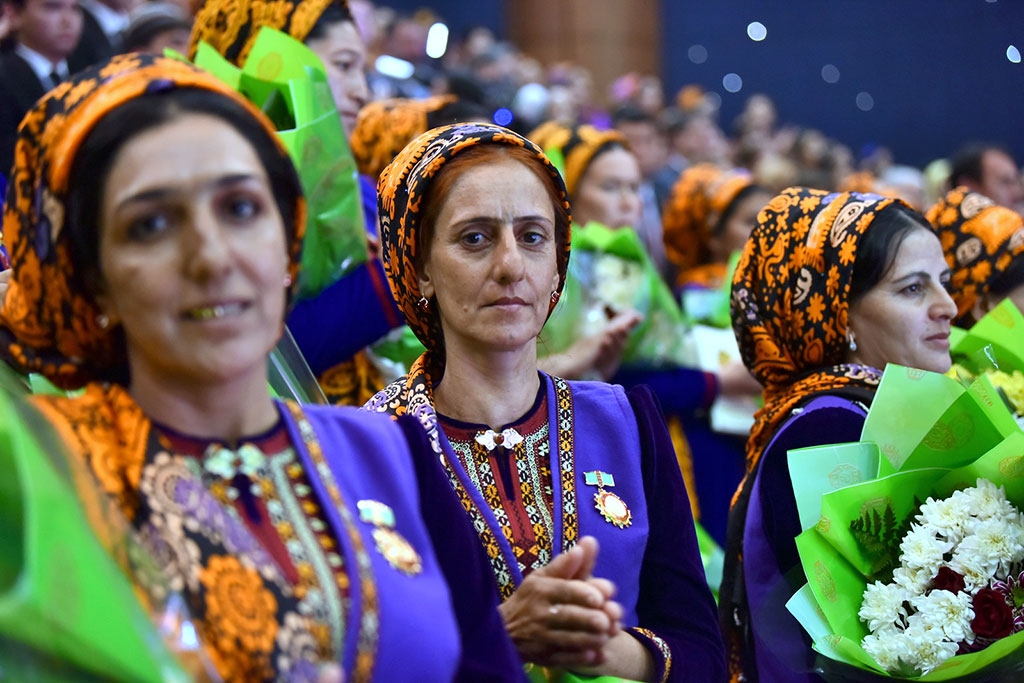 The regime in Turkmenistan is not interested in improving its human rights record.It is, however, prepared to engage in the choreography required to convince foreign partners that it is committed to doing so.

On July 21, Deputy Foreign Minister Vepa Khadzhiyev met in Ashgabat with Ryzsard Komenda, the Central Asia representative for the Office of the United Nations High Commissioner for Human Rights, for a bout of seat-warming.

A Turkmen Foreign Ministry statement has the pair discussing Turkmenistan’s supposed efforts to live up to the human rights conventions to which it is a signatory.Naturally, no officials in Ashgabat have the slightest interest in any such thing.

One bone that Turkmenistan is throwing the meddlesome outsiders is a pledge to improve the effectiveness of the Ombudsman.The Ombudsman role was created in 2016, and Yazdursun Gurbannazarova was given the role of heading that institution the following year.

Since 2018, Turkmenistan has produced four annual digests on human rights, all of dubious merit.The most recent edition, released in May, was a fairly useless document that devotes most of its pages to praising government policies.

The figures speak for themselves or don’t, in fact.All of 33 petitions were submitted to the Ombudsman over allegations of poor behavior by law enforcement authorities, for example.

This may well be an accurate figure, since few trust the Ombudsman’s office to do anything, but it obviously does not reflect the real scale of the problem.

The only detail that the human rights digest does reveal about the police is what pleasant conditions various precincts have installed for people that they detain.The few incidents that are recounted in detail attest to the absurdity of the report.

Take the plight of Citizen V.K, a resident of the Balkan province, who filed a petition to the highest enforcer of human rights standards in Turkmenistan to complain, among other things, that a shopkeeper was rude to them.

Following an investigation, the Ombudsman’s Office was unable to determine definitively if any rudeness had occurred, although the shopkeeper was nevertheless penalized for an unspecified trading violation.To suggest this is the most that long-suffering shoppers must endure feels like an almost calculated mockery not just of the Turkmen people, but also the foolish foreigners who behave as though there is any sense in engaging with Ashgabat on human rights questions.

Recurrent shortages of basic staples like flour, bread, and cooking oil means strict quotas are enforced at state stores, where those items are traded at subsidized rates.As RFE/RL’s Turkmen service reported earlier this year, police even film and take photographs of shoppers to keep tabs on how much they are buying.

Quota-flouters face two weeks in jail.At one point last year, stores were only operating under cover of darkness, so that the long lines could not be seen by the larger public.

One apparent recurrent concern is that these queues might be spotted by the president.Gurbannazarova’s report had next to nothing to say about women either.She only notes in passing that a representative from Turkmenistan was in April 2021 appointed to the executive committee of the United Nations Entity for Gender Equality and the Empowerment of Women, also known as UN Women. “This is a worthy reflection of our country's policies in the field of gender equality,” she concludes, evoking the knowingly mendacious remarks made in May by President Serdar Berdymukhamedov, who shamelessly talked in an introductory speech at an Ashgabat conference on the role of women in public life about how “gender equality is important in ensuring stability and harmony in society.” In reality, Berdymukhamedov’s young presidency has been cataclysmic for women’s basic freedoms.

As the London-based International Planned Parenthood Federation noted in a statement raising the alarm in May, “since April 2022, the government has taken policing over women’s bodies to a whole new level: imposing a virtual ban on abortion care, enforcing a ban on a range of beauty services, forbidding women from sitting in the front seat of private cars and prohibiting male taxi drivers from offering rides to women.” Things have only got worse since then.

In June, RFE/RL’s Turkmen service reported from the Balkan province how traffic police had increasingly taken to stopping women drivers on flimsy pretexts and confiscating their cars and driver’s licenses.

At least a dozen women, who seem to have been specifically targeted for this action, were affected, a resident told the broadcaster.When victims of this treatment went to their local city hall to complain, they got brusque treatment. “Why do women need to drive anyway?

Go home and take care of your children,” one was allegedly told by a female city hall employee. “Are you not ashamed, making eyes at young men like that?” Remarkably, the series of nationwide roundtables held in May under the auspices of the Organization for Security and Cooperation in Europe’s Ashgabat office to discuss implementation of the National Action Plan for Gender Equality for 2021-2025 does not seem to be having any noticeable effect yet.

Far from Turkmen people acquiring new rights, there is every reason to believe things are poised to get worse on at least one front, if that is even possible.

At a get-together of Central Asian presidents in Kyrgyzstan last week, Berdymukhamedov expressed his concern about what he termed “the illegal use of information technologies” and followed that up with a complaint about the “outside imposition of ideas and attitudes that run counter to the historical traditions of the peoples of Central Asia.” Such rhetoric, which can also be heard from other leaders in the region, is surely a prelude to more constraints on the right to “hold opinions without interference and to seek, receive and impart information and ideas through any media and regardless of frontiers” Universal Declaration of Human Rights be damned.

Turkmenistan may be a party-pooper when it comes to many other forms of international coordination, but officials in Ashgabat evince great eagerness to adhere to initiatives like the Information Security Strategy being implemented under the auspices of the Commonwealth of Independent States, a post-Soviet club of mostly undemocratic nations.

There is not much clarity about what such strategies have in mind, although the dream must be a regional internet firewall along similar lines to the one enforced by China.

In the meantime, internet users in Turkmenistan are already forbidden from visiting any number of dangerous foreign websites.Anybody unhappy with this state of affairs is free to raise it with the Ombudsman.