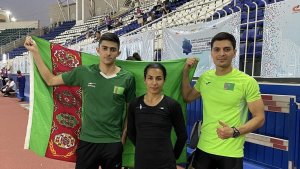 Athletes of the national team of Turkmenistan took the final second place in the medal count of the IV Open Championship of Central Asia in athletics in Samarkand.

They have 3 gold, 5 silver and 3 bronze medals, reports “Halk suzi”.

In total, within the framework of international competitions 56 sets of awards in 41 athletics disciplines were played.

Maksat Mammedov also won another medal - silver - in the discus throw (52,41 m).In addition to him, two silver medals were won by the men's and women's teams in the 4x100 meters and 4x400 meters relay races.