150 Toyota Corolla taxis have replenished Ashgabat’s car park, a Turkmen melon festival was held in Ufa, the music of the Armenian composer Arno Babajanyan will be played in Turkmenistan 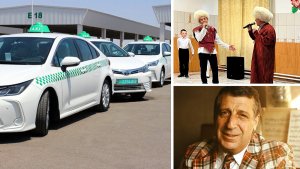 1. 150 Toyota Corolla taxi cars have replenished the technical fleet of the “Türkmenawtoulaglary” Agency on the eve of the celebration of the 31st anniversary of the independence of Turkmenistan. Taxis are provided with electronic tablets and payment for travel by bank transfer using bank cards has been established.

2.In Ufa, for pupils of boarding school № 2, who need long-tern treatment, a holiday “Day of the Turkmen melon” was organized.The event was held within the framework of the declared year 2022 the Year of the Cultural Heritage of the Peoples of Russia.

Cultural figures of Bashkortostan, and also guests of honor, singers Rahat Gurbangylyjev from Turkmenistan and Geldymurat Babayev from the city of Samara participated in the celebration.

3. The State Symphony Orchestra of Turkmenistan will dedicate its concert to the work of the Armenian composer Arno Babajanyan. The concert will be held on October 8 and 9 in August at the Mukams Palace.

4. The Turkmenbashi oil processing complex presented its novelties and advanced developments at the exhibition of economic achievements of Turkmenistan. Among the exhibits is a new motor gasoline of grades A-92 and A-98, which fully complies with the quality and environmental requirements of the EURO-5 and EURO-6 standards.

5. Russia can increase exports to the countries of the Caspian Sea, including Turkmenistan, thanks to the supply of soda, timber and metals along the Volga. For instance, the “Bashkir soda company” calculated that sending 360 thousand tons of soda ash by river to Turkmenistan is much cheaper than by rail.

6.Netflix is launching a new reality show about the lives of 10 millionaires living in Dubai.The heroes of the Dubai Bling show were people from the UAE, Saudi Arabia, Lebanon, Kuwait, Iraq, India and Australia, who will talk about their path to success and how they achieved fame and recognition working in real estate, entertainment and show business.

7. On September 30, Canada will lift the last restrictions related to entry into the country, which were introduced due to the coronavirus pandemic. Airports and other ports of entry to Canada will stop randomly testing arriving citizens for COVID-19. However, the mask regime will be maintained on trains and planes for the time being.

8. Chinese scientists from SinoGene have cloned an Arctic wolf. The species Canis lupus arctos is a subspecies of the common wolf that is distinguished by light fur and is found on the arctic islands of North America and Greenland. Cloning the Arctic wolf could save animals from extinction.

9.In the current draw of the Cup of Turkmenistan on football, all semi-final pairs have become known. “Shagadam” will play in the semi-finals with “Ashgabat”, and “Ahal” will meet with “Altyn asyr”.

The final of the Cup of Turkmenistan will be held on December 11.