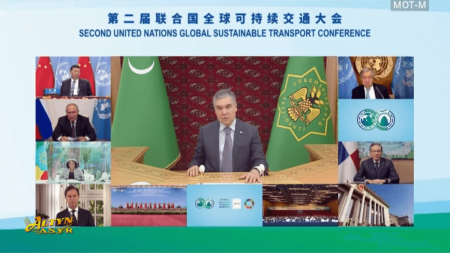 Today, President Gurbanguly Berdimuhamedov, at the invitation of the President of the People's Republic of China Xi Jinping, took part on the digital system in the second United Nations Global Conference on Sustainable Transport, which began its work today in the capital of the PRC - Beijing, the State News Agency of Turkmenistan reports.

Taking an active position in consolidating common efforts in this area, including in the format of the UN and other authoritative international platforms, neutral Turkmenistan initiates and, together with foreign partners, successfully implements large infrastructure projects, making a significant contribution to the formation of an extensive combined transport infrastructure.

In recent years, Turkmenistan, which occupies an exceptionally advantageous geographical position, has confidently strengthened its position as an important transport and transit hub and logistics center of regional and continental importance, striving to realize its impressive potential for the common good.

The largest international forums are also an effective platform for close interaction, discussion of plans for joint work, search for new ways and forms of cooperation designed to contribute to the global development of transport.

It should be reminded that the first UN-sponsored Global Conference on Sustainable Transport, held in November 2016, was held in Ashgabat and became one of the important events proposed by the Turkmen side in order to expand cooperation in the field of transport.

Today, China has taken over this baton and has become a co-organizer of the three-day forum, which is being held with a broad representation of governments, business, civil society from a number of countries, as well as major international structures, primarily the UN.

In his invitation letter sent to President Gurbanguly Berdimuhamedov, President of the People's Republic of China Xi Jinping stressed that this is a good opportunity to share experience in the field of sustainable development among UN members and discuss plans to deepen cooperation.

Also, according to the Chinese leader, the forum will give impetus to international solidarity against COVID-19, the joint implementation of the 2030 Agenda and the restoration of the global economy.

The weight of the international conference was given by the participation in it of the Secretary General of the United Nations Organization Antonio Guterres, whose speech became a kind of prologue to the beginning of the work of the representative forum.

Welcoming the conference participants, the head of the UN noted the importance of the topic raised, which reflects a common understanding of the need for cooperation in the field of transport, an awareness of the truly colossal opportunities that this mutually beneficial partnership opens up for states, regions and entire continents in the current difficult time for the world economy.

Speaking about the special role of sustainable transport in global development, Antonio Guterres highlighted the constructive position of independent neutral Turkmenistan, which takes an active part in developing effective approaches to solving pressing problems of our time.

As it was noted, it was Turkmenistan that at one time came up with the initiative to establish a global dialogue on transport issues under the auspices of the UN, proposing and organizing, together with the UN, the first Global Conference on Sustainable Transport.

The forum, held in Ashgabat in November 2016, marked the beginning of a new stage in broad international cooperation on the development of international transport as an integral part of sustainable development.

As is known from history, in ancient times, trade caravans connected the east with the west, influencing the effective nature of relations between countries and peoples, he continued.Noting that at present, due to the COVID-19 pandemic, some difficulties have arisen in international cooperation in the transport sector, the President of the PRC stressed the need to jointly fight against this threat.

In this regard, he noted, the countries of the world should make the necessary efforts to intensify cooperation in all modes of transport, to fully realize the existing potential.

As it was emphasized, the development of cooperation in all modes of transport is especially important both for strengthening national economies and for integrating landlocked countries into global partnerships.

President Xi Jinping noted that at present in all countries, production facilities are being developed with innovative methods, through a digital system.And this shows that for the successful solution of the tasks set, new approaches are needed, at a level corresponding to the spirit of modern times.

At the same time, the present time dictates the need to focus on the global environmental situation, the President of the PRC continued, stressing the importance of applying joint efforts of the partner countries in this direction.

Noting that the transport sector plays an important role in ensuring peace and global sustainable development, and also plays a significant role in strengthening the relationship between different countries and their peoples, President Xi Jinping stressed that China is ready to share the existing opportunities and accumulated experience.

The distinguished participants of the current Global Conference on Sustainable Transport listened with great attention to the speech of the President of Turkmenistan Gurbanguly Berdimuhamedov.As noted in the speech, being a consistent supporter and active participant of this dialogue, Turkmenistan at the political level, primarily at the UN, has for a number of years been initiating significant, meaningful and specific resolutions in the field of sustainable transport. - During this session of the General Assembly, we will continue to step up efforts to improve transport resilience in emergencies, building on the General Assembly Resolution “Strengthening links between all modes of transport to ensure stable and reliable international transport for sustainable development in and after the coronavirus disease (COVID-19) pandemic”, the Turkmen leader said, recalling that this document was adopted on the initiative of Turkmenistan on July 29 this year.

Also, President Gurbanguly Berdimuhamedov proposed to return to the proposal put forward by Turkmenistan earlier on the development of a UN Special Interregional Program for the Development of Transport.

In his opinion, the goals and objectives of such a program should be formulated on the basis of the successively adopted four resolutions of the General Assembly on the development of international partnerships in the transport sector, the Outcome Document of the first Global Conference on Sustainable Transport in 2016, and other multilateral documents on strengthening transport connectivity at the global level.

Taking the opportunity, the head of the Turkmen state drew the attention of the forum participants to the fact that in the context of a pandemic, developing countries, primarily those that do not have direct access to the World Ocean, turned out to be especially vulnerable.

It was on them that the forced restrictions in transport communications were most affected.And for the same reason it is more difficult for them to reach the post-crisis level. “We are convinced that today the world community, represented by the UN and international institutions, needs to provide assistance and support to this category of states, including in overcoming the recession and systemic reintegration into world transport processes,” the leader of the nation said.

In this regard, the head of Turkmenistan noted that in April 2022, our country, together with the United Nations, plans to host the International Conference of Ministers of Landlocked Developing Countries.

Inviting interested countries and international institutions to take part in this important forum, President Gurbanguly Berdimuhamedov said that the Turkmen side, as a co-organizer of the upcoming conference, is open to any meaningful initiatives, proposals and recommendations for its holding.

Addressing the participants of the second Global Conference on Sustainable Transport, the head of Turkmenistan stressed that today more than ever coordinated, responsible and far-sighted decisions aimed at minimizing the consequences of the crisis, as soon as possible attaining sustainable indicators of economic growth are important.

An important prerequisite for this, in our opinion, could be a discussion at the UN level, in parallel with global strategic plans for transport interaction, issues related to the harmonization of norms and rules, simplification of customs and migration procedures, as well as other pressing problems related to international cooperation in the field of transport, said the leader of the nation.

As it was emphasized, the forms of such convergence, their geographic configuration, speed and modalities can be different.The main thing is that they promote an effective partnership, taking into account mutual interests, and contribute to global plans for sustainable development.

And of course, they would be free from politicization. “Turkmenistan confirms its adherence to these goals and principles, is ready for the closest constructive cooperation for their early implementation,” President Gurbanguly Berdimuhamedov said at the end of his video speech.

Thanks for their attention, the head of Turkmenistan wished all the participants of the conference success and fruitful work.The representative composition of the participants of the current forum, the productive discussion of the raised topics became an indicator of the commonality of tasks and goals of different states of the world interested in strengthening constructive international cooperation in the field of sustainable transport in the name of universal peace, development and progress.