Turkmenistan Under Serdar: Has Anything Changed? 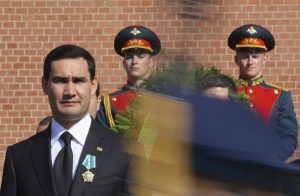 Serdar Berdimuhamedov has been president of Turkmenistan for four months now. One might wonder if anything has changed in policymaking in the aftermath of the dynastic succession from his father, Gurbanguly Berdimuhamedov, who held the presidency for 15 years.

What Has Remained the Same?

In terms of political freedom and human rights, there has been no change under Serdar’s leadership. The security services are still the most powerful agency in the country, controlling and censoring anything critical of the regime. Political prisoners have not been released. Free media are still not allowed, and what media exist are tightly controlled.

Serdar did not bring in his own cabinet team and after his inauguration kept almost all senior-level government officials in place.He then continued the legacy of his father in reshuffling the positions of certain ministers by transferring them from one ministry to another, so they won’t get too influential and powerful in their respective positions and fields.

But new figures have not appeared.

Turkmen embassies around the world still do not process passport renewals to Turkmen residing abroad.If citizens of Turkmenistan have expired passports, they need to travel home and renew their passports in Turkmenistan.

Travel bans for everyone (including Turkmen citizens), which were unilaterally imposed by the government of Turkmenistan since the beginning of COVID-19, have made the life of Turkmen migrants living abroad very difficult.

Some have had to stay illegally in other countries, unable to travel home and also unable to renew their documents abroad.

Starting from July 2021, 16 months after the travel ban was enacted, the government began putting stamps on expired passports with a new expiry date of December 2022 but continued to not issue new passports. The expiry dates were extended again in April 2022 so Turkmen passports will be valid through the end of 2024.

Under Serdar, Turkmen citizens still can’t get new passports and can only get renewed dates with a stamp from an embassy. Not all countries recognize these stamps and many Turkmen citizens wishing to travel to the European Union have not able to obtain visas with the extended, not new renewed, passports.

The biggest victims of Serdar’s presidency so far have been women and internet users.At the beginning of April 2022, most beauty salons for women were ordered to close for various sanitary reasons.

Since all universities in Turkmenistan are government-run, these restrictions affected women studying and teaching at public universities, too.Women were also not allowed to sit in the front seats of cars from the beginning of April.

None of these rules are “written” and those who enforce them just say that they are “orders from above.” By the end of May, some of the restrictions had been loosened. Women can be seen again sitting in the front seats of cars and enforcement of “rules” about women’s make-up and clothes has weakened.

Another area of regression under Serdar is internet access. The internet was already heavily restricted in Turkmenistan under Serdar’s father, who blocked all social media sites and many other websites. Thus, many people took to using VPNs to access blocked sites. However, the use of VPNs has been curtailed as well.

In some cases, the internet was completely shut down at the beginning of April, a period in which people could not even use unblocked websites due to low speeds. According to the Speedtest Global Index, Turkmenistan ranks 179th among 182 countries, ahead of Yemen, Afghanistan, and Cuba, in terms of fixed broadband speed.

Lastly, from the beginning of May 2022, many residents of the capital, Ashgabat, and other regions were cut off from continuous water supplies and could only get access to running water in the mornings and evenings. This problem still persists and water shortages have become one of the biggest problems facing ordinary Turkmen in the last couple of months.

What Has Improved Under Serdar?

Inflation rates have appeared to drop over the last couple of months since Serdar took over the country.Although inflation rates are not publicly shared by the government, there are other sources to consider.

Inflation in Turkmenistan is largely driven by the black-market exchange rate and the exchange rate has been decreasing recently, which has resulted in declining prices for palaw ingredients.

Serdar partially resumed international travel for Turkmen citizens leaving and entering the country.Turkmenistan completely closed its borders at the beginning of the COVID-19 pandemic in March 2020.

Essentially, nobody was allowed to enter or leave the country for two years without the approval of a designated agency called “the Extraordinary Commission on combatting the spread of diseases.” Those wishing to leave or enter Turkmenistan had to go through a lengthy process, and only those who paid bribes (around $2,000 to enter and $5,000-$8,000 to leave the country) were allowed to cross the border.

Serdar resumed some twice weekly international flights operated by state-owned Turkmenistan Airlines in June 2022 to Dubai (UAE), Kazan (Russia), and Moscow (Russia).Leaving and entering the country by other means of transportation is still forbidden.

Flights to Turkey, where Turkmen citizens can travel without a visa and where the largest Turkmen diaspora lives, have not been resumed yet.

As for personal attributes, unlike his father, Serdar has not started singing, dancing, writing books, drifting cars, and doing other ostentatious and peculiar things.He also sacked his aunt (Gurbanguly’s elder sister) Gulnabat Dovletova, who worked as the head of the local branch of the International Red Cross and Red Crescent Society.

She is said to have used the organization to her own benefit by exploiting the state benefits given to the charity.Pharmacies opened under the auspices of the Red Crescent were also run by her for a profit with various tax benefits.

Sacking his aunt and not copying his father’s eccentric behaviors can be considered positive attributes.

Serdar Berdimuhamedov and Turkmenistan’s Digital Transformation
The Berdymukhammedovs’ family conflict. The President has dismissed his aunt from the position of CEO of the Red Crescent Society
The Prosecutor General of Russia paid a visit to Turkmenistan
ADB Strategy For Turkmenistan Discussed in Ashgabat Meeting
The President of Turkmenistan announced his intention to hold the Olympic Games
Turkmenistan intends to hold the Olympic Games, in 2022 it plans to produce more than 7000 tons of sunflower oil, rules for the installation of tactile ground indicators for the visually impaired have been approved